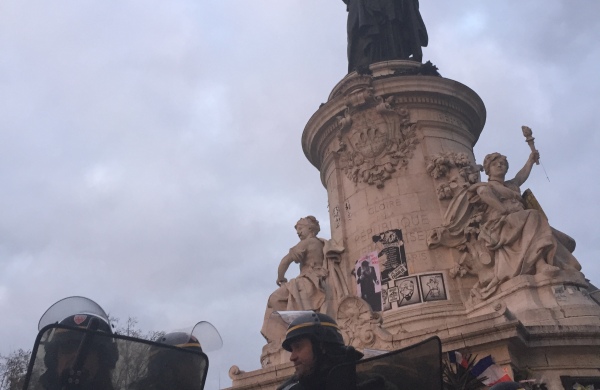 We arrived home to see the news of the rent-a-crowd activists at Repubique. There was a helicopter flying overhead, constantly as we walked the 1 km to Republique. The roads… Read more Cop21 climate march →

After buying food at the market on Richard Lenoir Blvd we were waking home and came across a floral tribute against a fence in the centre of the boulevard. Looking up ahead we could see a steady stream of people in groups of 2-3 crossing Richard Lenoir Boulevard in the direction of  Republique. They were waking for climate change in the march that had been cancelled. These were everyday people, walking silently and reverently. We joined them and soon saw a growing field of floral tributes fading in beauty, as… Read more a chance happening →

the gift in Paris for ArtCOP21

Today was the first day on the streets of Paris gifting. There is quite a sombre mood walking and in the metro. It is difficult to engage people so I… Read more the gift in Paris for ArtCOP21 →

Anthropocene Interventions is an ongoing series of art events and interventions occurring in a contemporary office space, conducted by an artist engaging with sculpture, installation and socially engaged arts practice to allow the co-workers to question their relationship with Nature. The first project, Anthropocene Interventions I, engaged co-workers for one year on site.  The artist attempted to bring Nature into the office environment to engage the co-workers in a dialogue about the Anthropocene. The concept of the meshwork was utilized visually to assist with communicating the idea that all things… Read more the project →